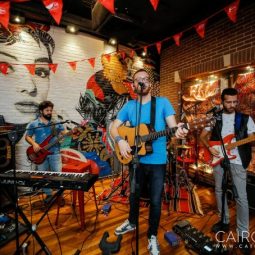 5 Egyptian Tribute Bands That Give Us The Same Chills as the Original Bands!

Music is an escape for many people. So, sometimes all we need is to see our favourite bands play. But, if you can’t travel all the way there (or your favourite band has long disbanded), you’ll want to listen to some Egyptian tribute bands instead. And, you know what? You’ll be happy that some Egyptian fellas thought of creating these tributes in these bands’ honour! Read this article to learn about some of the unmissable tribute acts.

Music fans are EVERYWHERE, aren’t they? With their love and appreciation of good music, it’s no wonder there are so many tribute bands in honour of these OGs! If you want to learn about these Cairene tribute bands, all you have to do is read this article. From Twenty-One Pilots to Coldplay, there are endless tribute bands that you’ll want to listen to!

Coldplay makes us dream of “para-paradise” every time we listen to its music and its beautiful lyrics, which is why we NEEDED a tribute band in Egypt for this wonderful act. Named after the band’s hit song, Strawberry Swing covers AMAZING Coldplay hits.

Abdelrahman Sherif and Mohamed El-Khaleel are the founders of this awesome tribute band, which they’d started because of their love of Coldplay. With their spirit and influential vibes, we honestly think it was the best decision they ever made!

The Beatles are one of the greatest rock bands of all time, so whenever we’re feeling any level of emotion, we always listen to them because there’s definitely a song to suit the mood. With how great and touching the Beatles’ songs are, we needed to mention Glass Onion for bringing them to highlighting the band’s influence in Egypt again. And, and we thank them dearly for being a mesmerising act overall.

You have got to be in a certain mood to listen to Twenty-One Pilots….and that mood is “ALL THE TIME” because this American alternative pop act turns our heads every time! That’s why you also need to listen to Skeleton Clique, TOP’s tribute band, which gives us more of that same vibe. Here’s a bonus: The vocalist has the perfect Tyler Joseph-like vocals, and we’re living for it.

Rock ‘n’ Roll is universal, and rock music wouldn’t be the same without Nirvana, with its music continuing to bless our ears, or some Foo Fighters hits to get our feet moving to the beats and singing our hearts out. Guess what? Seattle Band gave us JUST THAT with its Rock ‘n’ Roll tribute act—chills.

Alex Turner is a blessing, as is his band Arctic Monkeys. This is why we cannot help but love that English band even more than we already do. But, we did the impossible when MangaBeys, an Arctic Monkeys tribute band, came into existence to play us covers of the band’s indie and alternative jams.