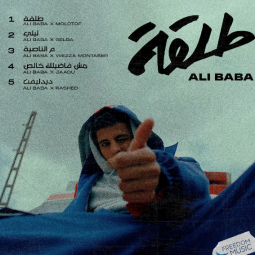 Ali Baba and The Forty Flows: A Tal2a Review!

If you haven't been streaming Ali Baba's new mixtape, Tal2a, then go do that right now! The rising rapper has just given us 5 new tracks that we can't get enough of. To know what we thought of the entire mixtape, check this article out!

As lovers of Egyptian rap music, we’d like to think that we have some foresight into its eclectic scene. That’s why we’d also like to say we feel that up-and-coming rapper Ali Baba has an exceptionally bright future!

To find out what we thought of Ali Baba’s Tal2a mixtape, read on. The music video for Tal2a didn’t need its insane Shahyn cameo to stand out. Do you know why? Because this track was already on fire! Yes, seriously–we’re not exaggerating when we say that the titular track for Ali Baba’s mixtape was aptly named.

Listening to this exciting, anime-opening-like track does feel like listening to a bullet whizz by! Naturally, Molotof’s eclectic beats sealed the deal.

With smooth, ocean-like beats provided by none other than Gelba, it was no wonder Laile sounded as good as it did! Although the lyrics make the track seem semi-cynical, overall, it’s hopeful. And it shows Ali Baba at his best: When he’s telling it like it is. Can you really hear a rapper’s EP or mixtape without a track detailing how much of a bad*ss he is? Yeah, we didn’t think so either. So, you can imagine how excited we were when we heard this track!

In the perfect collab with rapper-producer Wezza Montasser, Ali Baba uses this track to take us on an audibly vivid journey to the streets. Here’s what we have to say now: A collab with Mousv would hit differently. In this track, Ali Baba switches up again with an especially fast-paced delivery that makes Msh Fadelek Khales one of the best tracks on this EP. Half of this success is also attributed to the track’s producers Jaadu, of Murda by Dareen and Tagy by Nubi fame. After all that we’ve said about Ali Baba, you can only imagine our reaction when we saw that he made a track with Rashed, who you may know from Marwan Pablo’s Kaas. If your first thought was, ‘this track must be fire’, you’d be right. However, we won’t spoil it for you, so all we’ll say is give it a listen; you won’t regret it.