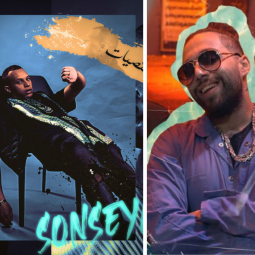 If you're a fan of Egyptian rap, you might have noticed that our rappers tend to be a little...repetitive when it comes to certain things. Even though we all love them, we thought we could have some harmful fun by listing the 5 things that all Egyptian rappers seem to mention consistently!

via Spotify and Scene Noise

With Egyptian rap music dominating Egypt’s popular consciousness, saying that we can’t get enough of the genre would be an understatement. It’s why we couldn’t get enough of Nesr El Scene, too—we love getting a peek into rap culture and its artists. We even like noticing things, like how much Egyptian rappers fixate on certain things.

Like what, you may ask? Well, read the article to see what are the 5 things we think our rappers can’ seem to stop mentioning. via Goal and Egypt Independent and Marca

Every single rapper on the planet has done this at least once or twice…or three-thousand times, but it makes sense. Who doesn’t like referencing super-talented athletes? With rappers in America referencing NBA players and rappers in Europe mentioning footballers from the big five football leagues, it’s only natural that Egyptian rappers do that too.

Some rappers (like Marwan Moussa) tend to reference footballers more than others do, however you can be certain of one thing: Almost all Egyptian rappers have mentioned Mohamed Salah at least once. No country exists without a unique urban mythos. Part of Egypt’s urban mythos is the character of Ibrahim El Abyad because, despite only coming into being in 2009,  he generally represents a lot of the chaos embedded in our culture—sort of our very own Travis Bickel.

With such a loaded significance, it’s only natural for Egyptian rappers (and Mahraganat artists) to repeatedly mention him. One thing we have to say about all this is that if you have to degrade someone else to mock someone, then you really haven’t insulted them. Who doesn’t love living it up on the lap of luxury? Rappers love being pampered as much as anyone else and are quite fond of pampering themselves with a lot of high-end things too. If you try to keep track of how many times words like ‘Gucci’, ‘Versace’, and the like are mentioned, you will probably lose it.

The N-word For Some Reason Unfortunately, a lot of non-black Egyptian rappers seem to think that they have full rights to the n-word slur…which they really don’t. We’d rather they stop using it because not only is it offensive, but it also makes light of systematic racism that black people face every day.