Captured Through Tweets: Is Your Personal Life Really All That “Personal” in Egypt? 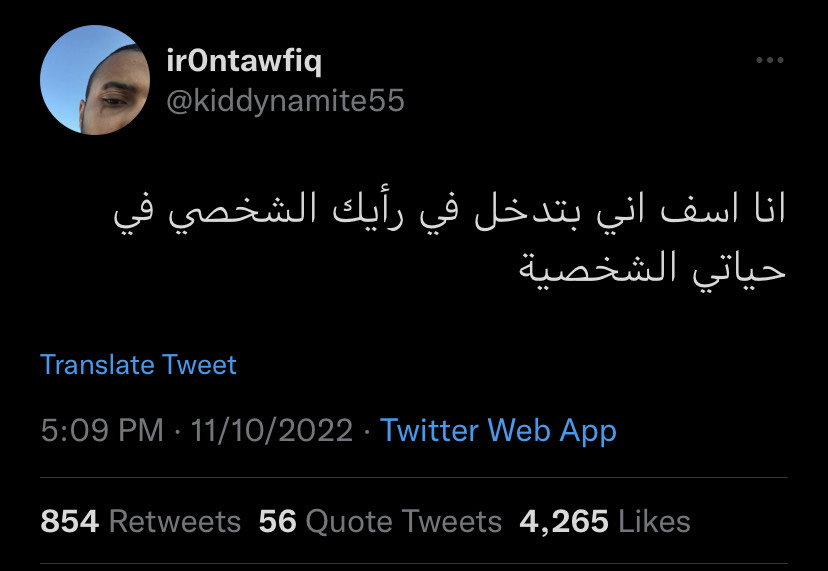 Many Egyptians bluntly say what they think about others’ personal lives, and we think it’s the most annoying thing ever! This is more common among older people in families; we’re sure everyone has experienced that moment when they haven’t seen their older relatives in a long time, and upon seeing them, they tell you, “you should get a haircut” or “why did you gain/lose so much weight?” This even applies to coworkers you may not be close with, yet they take the liberty to comment on the looks of your clothes or your life choices. But where does all this “3asham,” or entitlement, come from?

And it doesn’t stop there; if you get perplexed or try to explain yourself, you’ll be further attacked with comments, and everything you say will be disregarded! That said, we found this Tweet and its replies about the insolence some Egyptians have when it comes to our personal life choices. It’s like Egypt’s very own version of the “sorry, not sorry” trend, but with a dark and comedic twist!

The thread started with one Twitter user cynically tweeting that he would like to apologise for interrupting someone that stated their opinion on his life. Of course, what this Twitter user really means to say is that these types of people do not back down and will still carry on with their entitlement to comment on your life regardless. That’s why he decided to apologise -- in hopes of cutting the conversation short.

The same user replied to his own Tweet that he would like to apologise again, but for interrupting someone who had already interrupted him when he was speaking. And yes, this happens more frequently than we’d like! Some people will just keep interrupting you rather than attempting to listen to a single word that you say. Disrespectful? We believe it is, but they don’t seem to!

Another person joined the cynical “sorry” thread with a reply stating that they were sorry for not listening to someone who wasn’t listening to them in the first place. Again, when did we decide to approach conversations with a lack of respect and regard for boundaries?